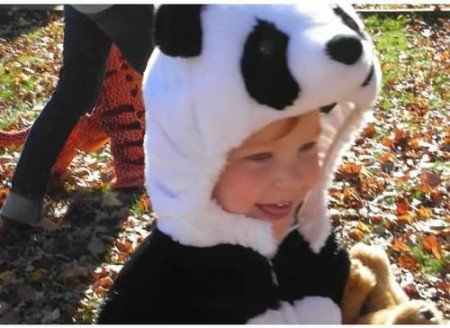 We would start as soon as we saw the Halloween store’s sign. She would wander the aisles considering all her options. Would she be a cowgirl or maybe a princess- but she really liked the cowgirl hat with the long braids attached. No matter what she ultimately chose, it always seemed to fall short. Before we were out of the parking lot she would announce – “they will still have the cowgirl next year- next year maybe I’ll be a cowgirl.”

There was one year she never questioned her decision. The moment I heard her call to me from across the store, I knew she had found it. She and her Dada, they had found it- a panda- she would be a panda. She squeezed into the costume that was a size too small and her eyes shone so bright my heart could feel the warmth. She would be a panda and Halloween could not come fast enough.

She and her brother marched up to each house chatting the entire way- she was a panda and she was so very proud. That was the last Halloween that was not postponed. It was a picturesque New England Halloween- pumpkins glowing along the walkways as children flocked up to each door. That was the year that we stood back and let them go all the way to the door alone. We watched wondering who was being the braver one.

This year he said he didn’t need to go to as many houses. He reminded us that “Catherine- he would give her his chocolate- and well you know.” Yes- I know little one. Yet he still wants to go because it’s Halloween and that’s what we do on Halloween and I know he is the brave little one. I also know while we may not see her, I know Catherine will be marching to each door- right beside him- proudly wearing her most beautiful costume.