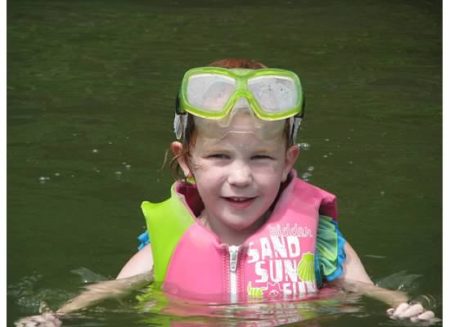 I stopped in my tracks. It was like the day I found the long lost flip-flop tucked under the step- the pink one she was heartbroken to have lost. When I saw it I called out to her- relieved it was finally found- and then I remembered, she no longer walked this earth. This time it was the goggles just sitting there as if she had dropped them on her way in, determined to beat the brave one to whatever they had decided was next. I stopped in my tracks- the tiny goggles- they took my breath away and brought me right back.

The water called to her. It. Just. Spoke. To. Her. She did not care whether it was a lake or a beach or a pool- when the water called, she answered. Some days she was a dolphin diving in & out, up & down along the shoreline. Some days she was an underwater explorer- the mask as big as her face as she searched the shores “depths” for ocean’s treasures. Other times she was a shore bird, arms straight out like wings as she’d plead with her Da to go faster so the tube would fly her across the water.

It was the waves, though. It was the waves in which she would delight. As we made our way to the tiny island, she would see the breakers’ white caps in the distance and could not get there fast enough. While she looked at them with eager anticipation, I would look with awe and trepidation. You could sense their sheer force and magnificent power- a gateway if you dared but the reality was- they were a barrier reef. As we approached, the breakers would send out it’s rollers- spitting at us with the salty spray as if to say “move no closer. ”  I would draw my arms tight around her tucking my head into the small of her back. I would want to turn back even though I knew powering through would lead to a place where the rolling water could minister to the soul. When we would arrive at the tiny island, she would run to the rollers as they crashed onto the shore. She would stare them down; feet planted firmly in the sand, she would not waver.  Despite their power, their height and their crashing roar, she would not waver. It was in that moment, that moment of defiance, she sunk a life lesson into my soul.

I inhaled sharply- whatever the physical reminder- it always seems to be from another life in a different lifetime- a sucker punch that takes my breath away. This time the blow came from tiny goggles. I bow my head and whisper her name- the tears well up as I turn the knob and return to the life I now live. As crossed the threshold, my brave one called out, “Ma- guess what I found.” Our eyes met and I knew he, too, had been right back there. It happens to him too. He smiled and asked me if I remembered. And there it was- in that moment- in the sting of remembering what was and resting in what is, we had broken through the ocean’s breakwaters and arrived at the place where her rolling waves could soothe our souls.