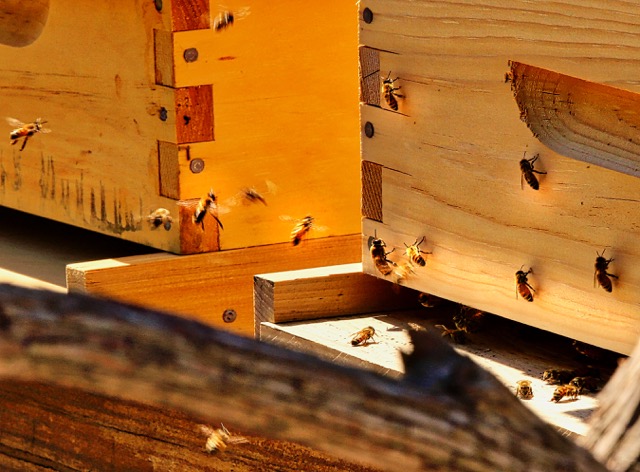 Sugar slid from the bag with a swoosh, sending puffs of smoke as it filled the bucket. “Halfway,” he said, “halfway is all we need.” Water slopped and sloshed filling the remaining space as he looked around for something to stir the grainy contents. A skinny shovel, the one that had been used to break earth for the very plants on which the bees feed, lay in wait in the truck bed. It was as if it was purposefully placed and appointed for this very task. He twisted and tugged the handle using it as a mixing paddle, creating a foggy, slurry syrup that would sustain during the days of dearth.

The days of dearth.

The sanctuary beekeeper called earlier in the week to say we were entering days of dearth and would need to feed the bees, the very creatures I had formed a special bond. Somehow over these days of isolation, I found sanctuary among my buzzing friends, always mesmerized as they scurried in and out of the stacked boxes. I knew Catherine had led me to these creatures to help me find stillness and peace. And they, without ever threatening to sting, shared their warm nectar with me. If heaven had a taste, this was surely it.

And now, the bees were entering a time of dearth – a time when natural nectar becomes depleted and the bees would face starvation if not fed. I thought, of course- a time of dearth. How apropos. Aren’t we all entering a time of dearth? Aren’t we all looking for that which will feed our souls when disappointments mount? At first, it was just a season cancelled or celebration postponed and while it stung, hope was found in spaces left empty: gardens tucked in tightly, families laughing over lingering meals and time rediscovered like sweet syrup.

What was sure to be resolved still remains unanswered. Plans postponed are now cancelled and the hope that filled the empty spaces quickly becomes routine, leaving one to wonder if this is how life goes on from now. And we are left wondering, on what hope will our souls feed?

Dearth. Yes, surely we have entered our own dearth. But friends, please do not fall prey to the dearth. For it IS the dearth where the bees are fed! This I know from the Beekeeper’s Story…

I sat on the trucks tailgate as the beekeeper stood over the bucket and wiped the sticky syrup from the shovel paddle. He winced as he lifted the bucket. His hand, he said, has never been the same and asked if I had been told the story.

“Only in parts,” I told him but asked gently if he would tell me. After all, it’s a sacred moment when a story of heartbreak is shared.

In his past, he had strung notes together, filling concert halls with the sounds of his violin strings, his instrument tucked snuggly into the fold of his neck, his music and soul becoming one. Then, it was over in an instant – the music, the passion and all that he knew was over in an instant.

I knew only too well the raw pain of life changing in an instant. My eyes welled. I was in the company of a comrade. The beekeeper looked at me, his gaze filled with what fed him during his days of dearth: the peace he discovered in the bees he loved and the journey that brought him to the sanctuary. He shared what fills his empty spaces and of seeing the divine in devastation- that heaven does cup a tear-stained faced. He spoke of moments of slurry turned syrup, the ones that sustained him upon a path of blind destiny.

I know these graces well. The simple moments when the bees I love scurry about, the way the light reflects off the water showering the garden in the distance, and the smiles, laughter and sparkles I encounter every day. And so it was on that day of the beekeeper’s story, the day I witnessed slurry turned to golden syrup, that I found the beauty in the dearth… a time when grace feeds a depleted soul until the garden is restored.