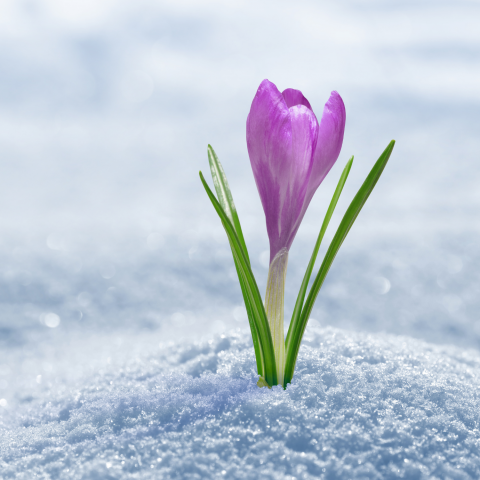 Awkward and clunky had no room to rear their ugly heads as I followed the arrows up and down the aisles of the grocery store. The other shoppers and I had done this a million times before, but on this day there was a buzz as we prepared for a winter storm. Together, we stood in a line that moved at a snail’s pace, pushed carts filled with bread, eggs and toilet paper – a barricade against those who had only just started their supermarket sweep. It was an exercise that could be categorized as a colossal hassle and grounds for a serious headache and yet nothing could be further from the truth. It was comforting and exciting and caused me to pause, tilt my head and smile in a realization of what she understood.

On the days when the sky exhaled and sent gentle flakes tumbling to the ground tucking the earth in with a warm winter blanket, she would stop short in front of the window. Whether it was the first or the eleventh, it was as if she had never seen such a scene. Every single time, she would just stop and take it all in.

Hours later, bundled up and transformed into a walking snow girl, she would do it all over again – shining eyes peeking out of her scarf covered face, shoulders straight as an arrow, she would stop for the briefest of seconds.  Just stop and take it all in.  And then, just like that, she would be on her way.  In an instant, snow would be flying and her laughter would echo from the backyard. It was always that way…the normal rhythm of a normal snow day.

I love the thought of Catherine in her pajamas standing at the window staring at the snow. Knowing what I know now, I love it all the more. I love that she had the wisdom to stop and look…to stop long enough to offer a simple acknowledgement.

As we emerge from this season of not so normal, where every day could be categorized as a “snowed in” snow day, we are all in some way stopping in our tracks – seeing the mundane with new eyes. Things we may have taken for granted a year ago are now seen as gifts. I dare say, if we all stop for a moment and are brutally honest, we will see beauty in that which once made us bristle.

And I will share my brutal honesty with you. Normal for me was a place where all was as it should be – where my baby girl gazed out the window and whose laughter echoed from the back yard. And when my normal was no longer, I learned to cherish the beauty in that which is ordinary and is now. This season has been a reminder of that lesson – a refresher course cautioning me to not fall prey to dismissing the ordinary in a world striving for extraordinary.

As we now talk of a return to normal, it has become a point of debate. Some speak of normal in code as if saying the word will jinx its arrival. Others say they do not want it to return at all, as if a return to normal will discredit the beautiful revelations discovered. Yet, despite the debate, that day of storm prep at the grocery store brought me to normal.  And now we are all offered an opportunity to pause and acknowledge the afterglow of the storm we have weathered, where self has been discovered and souls renewed, where families gather around tables and yes, where even preparing for a storm can be exciting.

I hope in the days that lie ahead, we all stop and linger at the window as Catherine once did…acknowledging the beauty of the normal and ordinary of the season passing and the season that awaits. May normal bring its comfort, consistency and predictability and become the tender balm that softens weary hearts worn by a heavy season.