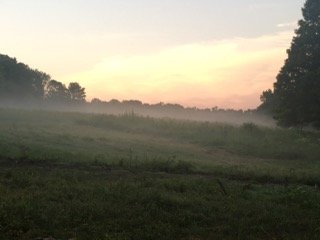 Heaven offered a protective blanket as my brave one set off to that distant place where his soul is settled.  He sets off not knowing my gaze does not veer until he disappears from sight and even then it lingers for a few minutes longer while I breathe deep in the knowing he will be all right.   I left him to settle his soul and set off to the place that settles mine. That morning, I sank into the dew-covered meadow, knees to chin, simply captivated by the way heaven’s blanket envelops its sacred ground.  It is here that I listen to my heart urging me to stop- even for just a moment- and breath. It is here that I allow whatever is to be comprehended then or a day in the future to seep its meaning into my heart.  It was on that morning when words not spoken branded my soul with meaning I have only yet begun to comprehend.

That morning, I watched it dance over the land; a thin veil of mist that became a fog so thick I could have been sitting on Monet’s Waterloo Bridge.  It was like so many mornings when she graced this earth.

I would rally my little one and my brave one and we one would make our way to their yellow chariot.  Mornings when the fog would roll in, my little one would be awestruck, convinced heaven had touched the earth.  As we set off, she would plant her hand so firmly in mine I was convinced she would never let it go.  Arms swinging, we made our way as she delighted in walking through the clouds.  And then it would happen, as had happened so many mornings.  No matter how hard she tried or how tightly she held my hand, she could not contain the tears that had been pooling.  Some days the dam would be released and she would cry openly and others it was as if she was unaware a rogue tear had escaped her grasp. When her chariot arrived, I would kiss the inside of her hand, the only way I could muster the courage to release it.  She would pledge, the hand I had kissed covering her heart, she had pushed it in, “all the way to her toes.”  And so with tear stained cheeks my little one who loved fully and lived fiercely set off with my brave one.  In their wake, the sun, which had been peaking over the tops of the trees,  planted itself firmly in the sky and the fog had disappeared.

That morning, when the thin veil turned into the fog that rolled over the meadow, troubles piled high and questions mounted and my already restless heart was rattled all the more.  The fog marching across the land seemed to want to taunt and convince the sun had been extinguished forever.  And yet, while many days I would have fallen prey to the taunts, on that morning, I was too tired to balk and beg it to not be true.  I curled in, knees to forehead and the tears that had been pooling for a very long time began to flow. The dam was released and I cried for what was, for what is and for what I could not yet comprehend.  It was there, knees to forehead every restless thought, every tear, every thing that had rattled was released into the dew-covered meadow. It was there, on that morning, the fog rolled over me and did not offend but offer a blanket of protection as I cried.

And then it happened. I felt it before I could even see it, it was like so many mornings after she died.

After she died, I would sit as the sun positioned itself in the perfect spot in the sky.  In the quiet hum of an empty home, I would settle into the rhythmic beat of a whirring dishwasher and brewing coffee pot.  Curled at my feet, the quiet would lull my brave one’s dog into a peaceful slumber.  Every so often he would arise, circle and plop down with a heavy sigh.  And I would sit.  I would just sit.  Some mornings, I would cry until my eyes swelled shut and my lungs felt as if they would collapse and others I would just sit and get lost in thought gazing into the space beyond the window.  It was the time I would wonder what was and what would be, acknowledge my fears and doubts and give thanks for the very much of which I had been afforded.  I learned if I sat long enough when the sun did hit that perfect right spot, it’s rays would stream through the window and cover me with a warmth and assurance I still do not  comprehend.

Like it had before, on that morning, despite the heartache and worries, swollen eyes and taxed lungs, the sun reached it’s perfect right spot in the sky and assured me it had not gone nowhere.  On that morning, like so many after she died, heaven’s arms reached down and asked for my hand.  And like so many mornings, I lifted my chin into its warmth and was pulled into its fold. It was on that morning, when my brave one set off to the place that settles his soul and I set off to the place that settles mine, when the sun had reached its perfect right place and when its rays seared through the fog that I was reminded of when we would make our way to their yellow chariot. It was on that morning, in the place where, for me, heaven and earth unite, that for just a moment, my little one planted her hand firmly into mine, reminding me her promise stands true.