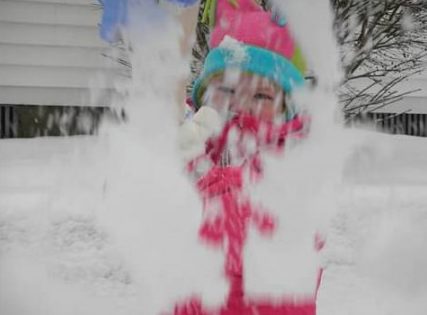 The mittens which had been nestled safely among our cold weather gear- tucked securely between my climate beaten hat and gloves and his rogue glove that lost it’s match two sizes ago- tumbled to the ground. They were the mittens that kept her tiny hands warm as she clapped them together to loosen the snow from their surface. The released snow would mesmerize her with its sparkle and twinkle as it floated ever so softly to the ground. The little mittens seemed so big when they adorned her hands and yet as I placed my hand over what at one time warmed hers, I realized, despite what I might have thought then, my little one was just a baby. The simple mittens pushed the gnawing ache in my heart to the surface and as much as I wanted to place both back in their appointed locations, I held the little mitten and closed my eyes and could almost feel her hand squeezing mine. Like every time something similar happens, I am transported to another place and time. I can hear her voice, the giddy chatter, sheer excitement or fiery determination. Even for a split second- I close my eyes and she is here and it is then. I do not know how or even why, it just seems to work that way. I am transported to the moment when:

When her Da told her she was beautiful in her party dress as she set off to her girlfriend’s at the cookie exchange.

When she and I would belly laugh with her brother.

When we rolled out the dough for a creation that would never be assembled.

When she decided no mittens that day and the gloves that would be returned in the box bearing her name would be the ones I had kissed so she could push my love all the way into her heart.

When it was three and not four……..

There was a time I would push the thought, the hurt or the pain aside. There was a time when I would return the mittens quickly to their appointed resting place, confident the pain would be too great and the wound too raw. I would assure myself- in time I will deal with the mittens and the scarf and whatever else I was else I had thought needed to be addressed. Without even realizing it, I had hung my hat on an untested truth that time will heal and a broken heart can easily be mended and the silly belly gut laughter that once filled the rooms of my home would once again rise without warning. Without even knowing, I had hung my hat on an unwritten promise that given time, the traditions of which our year was steeped would no longer be met with a sharp inhale as I dove into a vast abyss of unknown. When I consider the truths and promises of which time is accountable I have come realize it is an incredibly daunting task, one that may not even be possible or probable. What I have come to understand is that at this moment in my life- at this point in my journey- Time alone does not heal. Time alone will not heal. Time alone will not and does not heal and to say it does assumes life continues as is and all that is required is that I remain comfortable in a state of status quo. It assumes that with time and with patience, I will wake up one day and realize all is good in the world. Such a belief requires only that I place one foot in front of the other while waiting it out. The truth as I have come to know is that is farthest from the truth.

Healing comes with a determination and persistence to crawl out from under the covers when every ounce wants to pull them up and over and shut out the world. And when I don’t, when I peel myself out of bed and face another day, I am afforded a grace in seeing my brave one’s smile as he heads out the door. Healing comes when I take the breakers head on. When the salty water spits, sprays and pelts and I stand firm when every fiber of reasoning screams dive. A grace emerges when I walk straight through and am granted restoration in the rolling waves that soothe and lull my exhausted soul.

For five years I have lived in the truth that healing does in fact come. It, though, has taken five years to understand healing is not a direct result of time. I have come to hang my hat on the simple truth that in embracing the gnawing ache in my heart and crying the cry that leaves me gasping for air, splotchy and eyes so swelled I can not see- it is then and only then that my heart will be soothed and my soul restored. I will hang my hat on the simple truth that so long as there is time, there will be the mitten moments, the whens, the ifs and the whys that test and strain. As long as I live there will be times when the fire burns hot and pain sears. Because of this, I will hang my hat on the proven truth that without fire there is no forging and without forging there can be no gold. And in this truth, in this very truth, is a grace and a healing that knows no bounds of time.