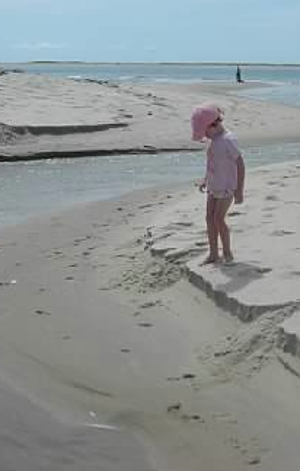 He casts out and reels in- falling into the rhythm of the waves breaking on the rocks beside us. I settle in beside him and pull my knees up to my chin. We are content in the stillness and peace that hugs us tightly.

It is the jetty she would cast her line from- just hoping for one fish to kiss and return to the cold waters below. Once she accomplished her mission, she would set down her pole and head for the deserted stand keeping watch over an abandoned beach. She’d shimmy to the top and scan the birds cleaning up the remnants of the day’s long forgotten picnics. She’d yell to me, “I’m up here!” as if she had escaped my sight.

After she died, we returned to this place in the dead of winter. Then, the power and force of the waves pounded, the spray assaulted, and the wind cut to the core. As we walked along the shore, I could not help to remember- she had once run this path and collected the treasures that the waves left behind. These were the waves in which she had pretended to be a dolphin diving through the wakes. She had climbed and sat in the very towers that peppered the beach. I had walked in silence, wondering if the people who came to find whatever their souls were seeking know they were walking on hallowed ground. Did they know she had once been here?

There is a gravitational pull that draws me to this place. My hallowed ground where waves no longer crash and the spray does not assault. The waves- now they lap the shore and create a love song that calms my soul. I see her, I hear her, and I feel her in the babies running along the shore. My heart warms knowing that they are finding the treasures that the waves left for them.

My brave little one reels in the line and smiles in delight. He has accomplished his mission and with a kiss, he sends it on its way. Just as he does, a seagull takes flight from the tower’s cover, letting out a screech as if to say, “I am here.”