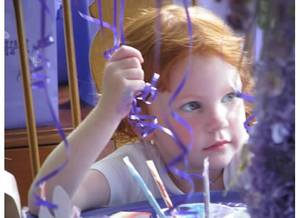 It was the celebration we always began thinking about in May. She would always tell us she wanted an animal party…. all the animals. After days of debating ways it could be an “all the animals’ animal party,” she would settle on something manageable- a purple butterfly party, a horse party, a fairy party- and she could be the animal fairy. Then the planning would ensue. Invitations, games, decorations, and a paper chain to count down the days. On the day when the last link was pulled, the car would be so full of balloons that it very well could float into the sky. Always pink, purple or both. Always the signal that it was time for her birthday to begin.

June 8th- the day she galloped across the yard on the broom stick horse when she was two. The day she was the animal fairy, the day she played pin the wing on the butterfly. Last year, it was the day she and Whisper galloped around the ring with her friends at her horseback party.

So many times since we lost Catherine I have thought about what this June 8th would hold. I see the peonies blooming and I think I should be cutting them to fill the house for when she wakes up on her special day. I have thought about what message she would have sent to the angels when she released one of her birthday balloons at the end of the day.

That was the way the day always ended. One more piece of cake after friends had gone home. We would dream about the big things that would happen in the year to come. And then, right before she would go to bed she would grab hold of the string of one balloon and head to the deck. She would close her eyes and open her fist. The balloon was for an angel’s birthday party- because she assured us angels have birthday parties too. I am sure that at some point today, a small hand will let go of a balloon. As it floats to the sky it will be the assurance that Catherine will be having a magical birthday this year.